Prepare to be impressed

I casually followed a link in a blog post Tuesday morning (thanks to Elana Johnson) and fell into a blog post series on story structure [Alexandra Sokoloff, thedarksalon.blogspot.com]. I've read about this topic before, and experienced the resultant epiphanies that improved my story, but this time (because I'm DESPERATE to FINISH) it clicked for me in a big way.

It was time to outline.

Instead of running screaming from the blog post, I decided to face it head on. So Wednesday, armed with a pen and a prayer, I set my entire novel to sticky notes. As I said...prepare to be impressed...and take notes for your kids and grandkids for when they have to analyze my novel in English class...ha, ha... 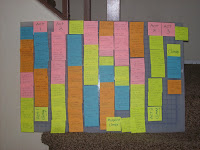 Isn't it beautiful? Each scene has its own sticky note, each chapter its own color.

You can't read it from the photo, but it's divided into acts--I have ACT 1, then the few chapters that comprise that, then the ACT 1 Climax, then ACT 2, then the Midpoint Climax, then the rest of Act 2--etc, etc. on to ACT 3, the final Climax/Resolution.

You may wonder...can't you just write your story any old way you want? Possibly. But the old way is a structured way. It's the way as human beings we like to hear a story. There's a flow, a growing of the character, there's build up, there's satisfying resolutions. Since this is my first attempt at a novel why not try what's tried and true. I think that's what will get an editor's attention...well, after they're hooked by the unique storyline and killer writing skills...again...ha, ha...

Thursday I began to analyze my story, which I can finally do because I can actually SEE IT. Before it was a jumbled mess in my brain, scattered through 26+ files in my computer. It overwhelmed me. So I moved a few sticky notes around (not too many it turns out) and I added a bunch where I need new scenes. I had major emotional epiphanies about my ending and how to broaden its scope (check out Writing the Breakout Novel by Donald Maas if you don't know what I'm talking about)

Now my storyboard looks like this...all those yellow stickies at the far far right are things I need to add... 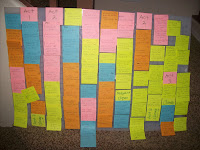 I took two pages, front and back, of notes for my book and printed off Alex's story structure list to use as my checklist. I was surprised to see that my story naturally contains the elements she talks about. Like Act 2 is comprised of laying out the MC's plan, the gathering of allies, then the tests (the blocks to the plan) begin and basically never end till the end. She talks about the "Dark Night of the Soul" moment when your character is at their very lowest point and there's no way they can go on, but...OK, getting carried away here... It's so fun, you should try it with your novel! 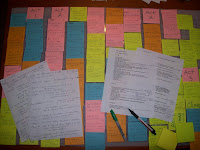 It inspired me to write on Thursday afternoon and to even clean up my writing area Thursday night--which was to the point of "I can't write in these conditions!" plus I wanted to be able to display the lovely storyboard on the shelf above my computer. Now it's right there in all its multi-colored, sticky note glory! Apparently, I'm a visual person and didn't know it.

Alex's blog series goes way beyond outlining and story structure--you should totally check it out. Thanks for the link, Elana.

Really interesting post Valerie. I tend to work from a broad outline - a list of chapters with a brief synopsis of each - but I've never tried this method, though I've often been curious about it.

It's beautiful! I'm impressed. I nearly had a panic attack imagining what my kids would do with a storyboard covered in sticky notes. My 17yo would replace some scenes with cleverly-written parodies (she's done that before with my outlines on the computer), my 4yo would draw all over the sticky notes, and the boys would just take off with them.

I may try this approach when the kids are older (and the clever 17yo moves out), but for now I use Randy Ingermanson's Snowflake Method to plan out a novel. I agree that I CANNOT write from the seat of my pants, and need very detailed outlining to stay organized. Even so, so much usually changes from the planning stages to the end result. Those charactes, they have minds of their own.

I like this idea too! And I never know what will work for if I don't try it.I tend to be a visual person so this might be my answer. THANKS for sharing!
AND I am impressed.

This looks like a good system, and I'm thinking it might be a good time to do this with my WIP.

Thanks for sharing!
Karen Dupaix

That is impressive indeed. Way to go! I am inspired.

I've always thought an outline would be limiting but I may try one myself. Even with my book of plain short stories. GREAT JOB Love the pics
Jane Still

Beautiful, Valerie! Just this past week I've been reading about great authors and read about one--whose name I can't remember--and he wrote standing up. Plus, he wrote all his scenes on 3x5 cards so he could move them around if he wanted. One of his books had over 2,500 3x5 cards! I think I like your sticky notes better!

I do something similar but all on the computer.
At about 30,000 words in, I headline all the chapters or title scenes or something (depends on the work). I shuffle them around until it's exactly how I want it. Some are written, some are not. I slowly cut and pasts the scenes I have written into the new document with big and bold headlines and then fill in all the missing blanks. Each time I sit down to write something, right around 30,000 words I realize that the mess needs to be cleaned up.
Looks like you found something that works for you!
My hands write too slow for my brain, it would make me crazy.

May I ask where exactly on Alex's blog she talks about the sticky note method? I'm looking for it!

Very impressive! I usually breakdown and do this when I'm about halfway through the novel. It gives me a visual and a sense of where I'm going, though I do know it's nice to see it.

AND you cleaned your work space. So do you want to stop by my place? :) I have chocolate...

I am impressed. I like Alex's structure, I learned alot from it. I love your sticky notes. :)

I throughout the last year, have found a way that is something between your method and a write it out on the computer style.

That's pretty cool. I'm afraid the sticky notes wouldn't last around my house with my climbing toddler, but I do like to outline. I'm going to look more into this idea.
Good luck!

Thanks for all your comments. I may have to try this on the computer next time.

Kathleen, it's under a section titled "The Index Card Method and Structure Grid." If you scroll down to the bottom of the post you'll see some other posts to choose from--it's one of those, plus in the sidebar you should be able to find it.. I didn't have space to divide mine into eight sections as she shows since my novel is pretty much written--I have a lot of sticky notes where her example shows her doing it early on in the process.

The thing that helped a lot (besides the visual) is Alex's list of what should be happening in a story right before the Act 2 Climax. I realized that is where I was weak--I didn't have enough escalating action, obsessive drive, hard choices, crossing of the line, loss of allies, reversals-revelations-twists... I found the list under the heading Story Elements Checklist in the sidebar.

OKAY, I FIXED THE LINK TO ELANA'S BLOG POST. NOW IT WILL GO TO ELANA, THE AUTHOR/BLOGGER, NOT ELENA THE PAINTER PERSON.

I like learning this method. Thanks for showing pictures and explaining your process and how it helped you.

Those sticky notes are beautiful. Impressive. Inspiring. I think this may be what can help me with my rewrite! Is there a outlining award? You get it, if there is!!

Wow! I may have to try this soon, as I'm nearing the halfway point of my novel. Impressive!

Thanks! I've done a similar thing with index cards. Larry Brooks also has en eBook on structure at www.storyfix.com and he'll be the keynote speaker at the next Storymakers conference. I also like www.hollylisle.com.

Great resource and beautiful multi-colored example. Good for you!

Wonderful! I need to go buy some sticky notes.

When do we get to read this long anticipated, well thought out and mapped novel of yours? I'm impressed.