I made myself a tee shirt. 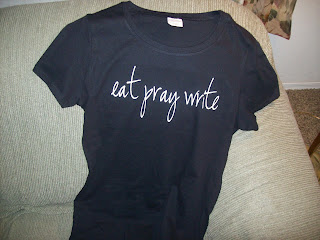 DISCLAIMER ALERT!! I'm not here to promote the book (which I did read) or the movie (which I didn't see) by a similar name. I just like the twist on the sentiment and thought it fit pretty well with my writer's life. Snacks and prayer are pretty important parts of the equation.

I thought I might wear this shirt when I'm all alone, just me and the computer, but then I happened to follow a link to Elizabeth Gilbert's website (author of Eat Pray Love) and was so impressed with her thoughts on writing I had to share.

She's talking about sharing your work... Find it here.

"...At least try. And when the powers-that-be send you back your manuscript (and they will), take a deep breath and try again. I often hear people say, “I’m not good enough yet to be published.” That’s quite possible. Probable, even. All I’m saying is: Let someone else decide that. Magazines, editors, agents – they all employ young people making $22,000 a year whose job it is to read through piles of manuscripts and send you back letters telling you that you aren’t good enough yet: LET THEM DO IT. Don’t pre-reject yourself. That’s their job, not yours. Your job is only to write your heart out, and let destiny take care of the rest.

As for discipline – it’s important, but sort of over-rated. The more important virtue for a writer, I believe, is self-forgiveness. Because your writing will always disappoint you. Your laziness will always disappoint you. You will make vows: “I’m going to write for an hour every day,” and then you won’t do it. You will think: “...I’m such a failure. I’m washed-up.” Continuing to write after that heartache of disappointment doesn’t take only discipline, but also self-forgiveness (which comes from a place of kind and encouraging and motherly love)."

Gilbert says that most writers think their writing is not up to par. Even when she was writing Eat Pray Love, she thought the same thing. But she says she had a "clarion moment of truth" while writing the book.

I have a friend who’s an Italian filmmaker of great artistic sensibility. After years of struggling to get his films made, he sent an anguished letter to his hero, the brilliant (and perhaps half-insane) German filmmaker Werner Herzog. My friend complained about how difficult it is these days to be an independent filmmaker, how hard it is to find government arts grants, how the audiences have all been ruined by Hollywood and how the world has lost its taste…etc, etc. Herzog wrote back a personal letter to my friend that essentially ran along these lines: “Quit your complaining. It’s not the world’s fault that you wanted to be an artist. It’s not the world’s job to enjoy the films you make, and it’s certainly not the world’s obligation to pay for your dreams. Nobody wants to hear it. Steal a camera if you have to, but stop whining and get back to work.” I repeat those words back to myself whenever I start to feel resentful, entitled, competitive or unappreciated with regard to my writing: “It’s not the world’s fault that you want to be an artist…now get back to work.” Always, at the end of the day, the important thing is only and always that: Get back to work. This is a path for the courageous and the faithful. You must find another reason to work, other than the desire for success or recognition. It must come from another place."

Yeah. What she said.

(And if you need a pen, you don't have to steal one, I'll give you one of mine.)

Posted by Valerie Ipson at 8:57 AM

Labels: getting published, people who have published books, writing

I haven't read the book or seen the movie yet but after that portion I justadded them to my list.

I really needed this. I do need to stop complaining and get to work. I really love the shirt too.

That was awesome! Thank you so much for sharing it. I really needed to read "hear" that today.
I'm going to have to check out her book. :)
And I LOVE the shirt!

Okay, so are you taking orders yet for shirt? And I love the post. I think I've been pre-rejecting myself for a while. Could it be like a syndrome, or a condition. Are there anti-pre-rejection pills to take. Sorry. I get carried away. I will get back to writing my heart out now. Thanks again.

Awesome blog. I think we all pre-reject ourselves for many things. Thanks for sharing.

Ditto on what Tamara said - if we bring shirts, will you put your quote on it???? And love the post. Maybe someday we'll have sage advice for struggling writers. Hold on.... OK, I'm back - just fell off my chair laughing. Sage advice. Hahaha! OK, I'm good... now back to writing.

Ditto on what Tamara said - if we bring shirts, will you put your quote on it???? And love the post. Maybe someday we'll have sage advice for struggling writers. Hold on.... OK, I'm back - just fell off my chair laughing. Sage advice. Hahaha! OK, I'm good... now back to writing.

Thanks for the great post and fantastic quotes! I posted one of them on my blog with a link back to your blog.

Thanks, Taffy. And also to the rest of you for comments.

Sure I'll do shirts for you. Bring a tee shirt to our next chapter meeting.

[I feel I should note...the parts I quoted are not from Gilbert's book. It's from her website. Don't pick up the book thinking it's a book on writing.]

Thanks. I needed that.

I'd like to buy one of those shirts from you. Will you take orders? Maybe you could sell some at StoryMakers or online?

Oooohhh...I may need to order one that says "Eat Pray Teach" for my boss/coworker for Christmas. Cute! I'll put it on my idea list! Thx!

Hi Valerie,
I love your T-shirt! I'm with you on this one. I think the three words are connected. We eat to nourish our body, our brain, in order to write. We pray when we're desperate and our WiP is not coming along the way we want to. ;)
So celebrate this mantra by wearing it!

I want a shirt too! That is so awesome! :) Loved this post. It really made me think.