SURVEY QUESTION for the well-cultured and/or well-traveled

While in Barcelona, Spain we viewed the spectacular Temple Expiatori de la Sagrada Familia, more simply known as La Sagrada Familia (The Sacred Family). Did I say it is spectacular? It is. You come up the stairs from the Metro to street level and there it is in all of its jaw-dropping wonder.

Its history, too, is facinating--just the fact that the first stone was laid in 1882 and a completion date of 2041 is expected. (At least according to the guidebook, though a postcard we bought stated 2025.) The architect Gaudi (who died in 1926) referred to it as "the last great sanctuary for Christendom." The guide book states: "Its spindle-shaped towers represent the apostles, the evangelists, the Virgin Mary, and Jesus Christ. The latter of these is the tallest, though not as tall as the nearby hill of Montjuic, for Gaudi believed that his work should not surpass that of God."

Now here's the thing...the guidebook makes some pretty huge claims about this structure. It says "it is the most popular sight in Barcelona." Fine. "It is also the most awesome--in the truest, jaw-dropping sense of the word." Okay, I agree with that. "It will stop you in your tracks." Yes. Yes, it did. But then it says this: "It is not an understatement to say that this is the most famous building in the world."

I personally had never heard of this structure until seeing it mentioned in the guidebook. There's the Taj Mahal, Buckingham Palace, the Salt Lake City Temple :D, all those other famous ones I won't mention here, but this brings me to my question...

Have you heard of this building? Before you see the photo of it below, do you know of the La Sagrada Familia? Leave a comment and let me know. 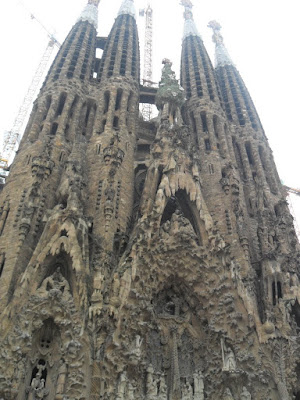 Sadly, the picture doesn't do it justice.

[Quotes taken from SPAIN by Moon Handbooks]
Posted by Valerie Ipson at 10:33 AM

Yeah, I would have to say a lot of other building come to mind ahead of it-probably hundreds.

nope. Never heard of it, but I thought the picture looked familiar.

Well, I'm neither well-cultured or well-traveled, but that is one great picture.

Looks like a really ornate conglomerate of mud sparrows nest to me. I am as uncultured as they come. I have heard of the Taj Mahal and Buckingham Palace though :-)

I am not well traveled or well cultured, but I have never heard of that building. I have heard of the Taj Mahal, SLC temple :D, great wall of China, etc....

Never heard of it . . . it reminds me of the drip sand castles we make on the beach every summer.

I absolutely loved "La Sagrada Familia". When I went to Barcelona, that was the first place I visited. I love Antoni Gaudì, who in my opinion, is one of the best architects (19th-20th century). Barcelona is an amazing city ;)