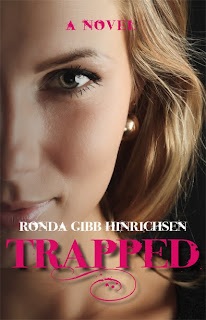 A Forged Letter,
A Golden Vial,
An Ancient Curse...
Filled with family secrets, intrigue, and romance the blog tour (August 9-August 24) for Trapped by Ronda Gibb Hinrichsen will have it all.

Her expression remained somber, but excitement crept into her voice. You are the Firstborn She...You must go to them. You want me to act as bait? Not bait, Emi. A spy. Our Trojan horse.

When Emi Warrin wakes one night to find a thief in her mother's house, she has no idea the intruder has planted a trap - a mysterious letter that will change her life forever.

Lured to the Austrian Alps with Daniel, the man she loves, Emi is thrown into a perilous, mafia-like world of feuding families and a devastating curse that spans generations. As the Firstborn She - the only firstborn female in hundreds of years - only Emi can free her family from the curse that will soon afflict her as well. But for Emi to break the curse, she must delve into evil designs.

As Emi struggles to understand her destiny as the Firstborn She, she learns that everything isn't as it seems and that all choices have consequences.

Can Emi break the curse before it's too late?

We will be giving away THREE autographed copies!

All you have to do is leave a comment (along with your email address if it isn't on your blog profile) and answer the following question. Which Austrian city would you most like to visit?
The more blogs you comment on the more entries you'll receive.
All comments must be left by midnight MST on August 27 to be eligible.
August 9
Heather Gardner
August 10
Jewel Adams
August 11
Mary Greathouse Teri Rodeman
August 12
Lynn Fowlstone Christine Bryant
August 13
Valerie Ipson Sheila Stayley
August 16
Deanne Blackhurst
August 17
Connie Hall C.S. Bezas
August 18
Kimberly Job Tristi Pinkston
August 19
Karen Hoover Nichole Giles
August 20
Alison Palmer Jessica Williams
August 23
Joyce DiPastena Laurie Lewis
Posted by Valerie Ipson at 10:25 AM

Labels: people who have published books

I'd visit all of them while I was there, but I would start with Salzburg.

I think I'd visit Salzburg.

I'd love to visit Vienna:) Thanks for the giveaway.

Interesting posts, Valerie. I'd love to go to Vienna and Salzburg, . I did start with Innsbruck,and a delightful little village called Mutters on the mountain above it, but that's about as far as I got. Now, it seems more like a dream.